|who what where ?|La Criée? 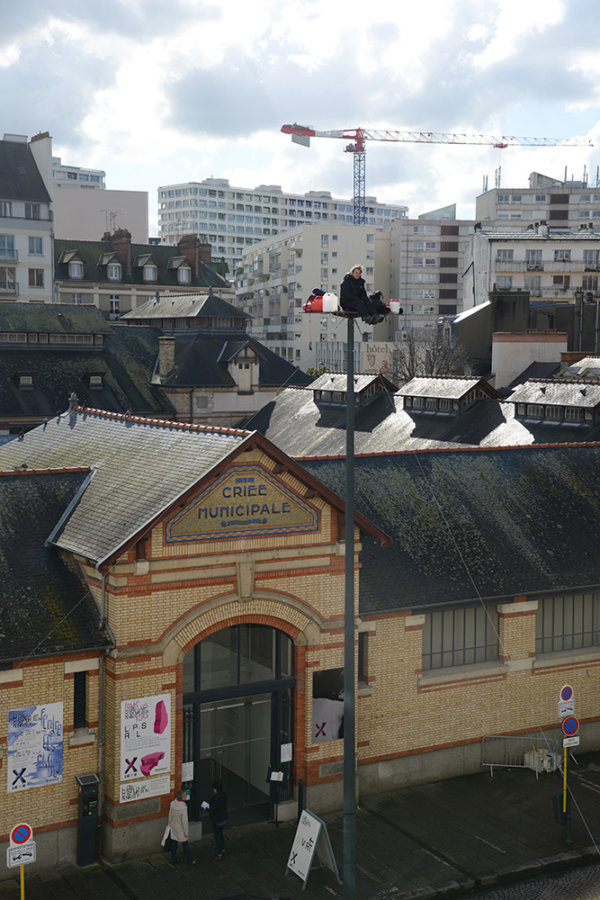 La Criée centre for contemporary art is an exhibition space and generator of ideas, encounters and verbal exchange. It is dedicated to artistic experiment and the production and dissemination of the work of emerging or established artists from France and abroad, both on site and in other venues.

Reaching out to a broad public from the old Halles Centrales covered market building in the very heart of Rennes, La Criée is both an originator and a reflection of the art forms of today and tomorrow – and the uses made of them.

Each season our programme offers a mix of exhibitions, art projects and multidisciplinary events responding to issues inherent in exhibition practices, research, international dissemination and an enduring presence locally and elsewhere. A core aspect of this set of aims is experimentation with different modes of contact and interchange with the public. 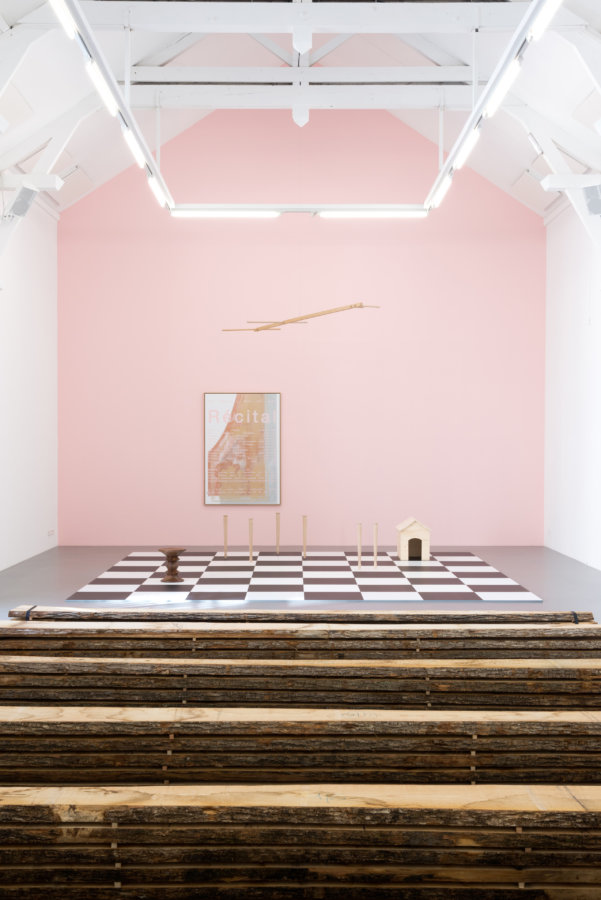 La Criée sees itself as a place for recounting what art is all about. One means for achieving this is regular recourse to themes ensuring momentum, consistency and a shared orientation for the art centre’s activities as a whole.

An art centre being necessarily a reflection of its surroundings, these themes are chosen in response to current movements and issues in art and society generally. Each series enables in-depth exploration of its particular theme.

The period September 2013 – August 2016 saw three successive seasons:  Courir les Rues (Pounding the Pavement, 2013–2014), Battre la Campagne (Beating the Bushes, 2014–2015) and Fendre les Flots (Breaking the Waves, 2015–2016). This first series mirrored the territories – geographical, social, artistic – in which it took place, enabling the exploration of three spatial contexts and their related imaginative realms: urban, rural and coastal. Borrowing its three titles from quirky French writer Raymond Queneau, the series was a statement of the art centre’s intention to embrace experiment and narrative, together with other art disciplines and fields of knowledge.

Titled Alors que j’écoutais moi aussi […] (As I was listening […]), the following series of exhibitions and events was devoted to the question of narrative in and relating to contemporary art. It began in Rennes in January 2017 and concluded on an American note – in Los Angeles and New York – in March 2018. This was an adventure at once subjective and polyphonic that addressed our relationship with books, statement and utterance, orality and rumour, history and fiction.

One or more artists were associated with these thematic series.

The next series will begin in September 2019. 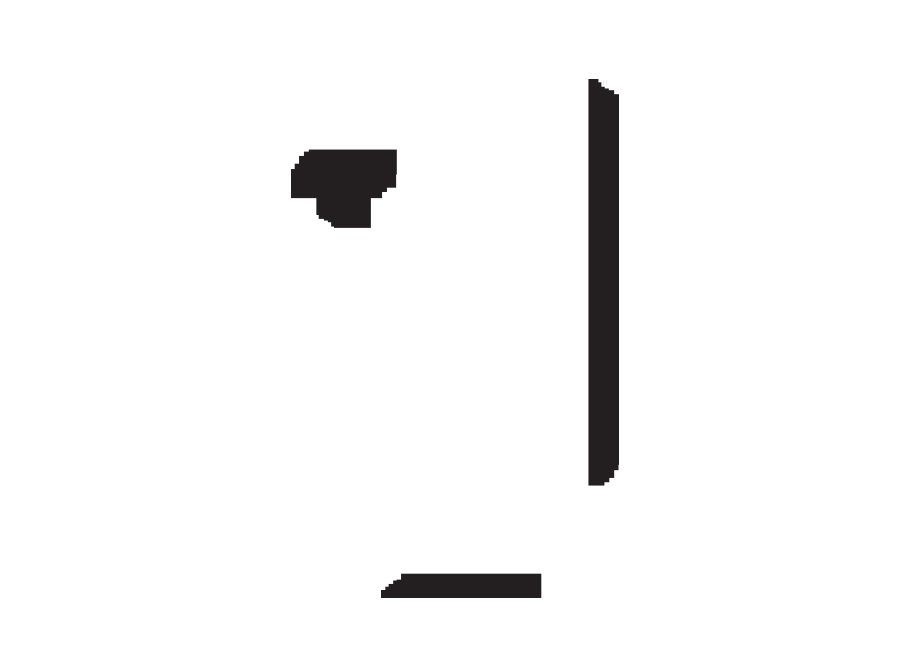 Since 2013 the art centre has been making innovative use of a model inspired by the performing arts. Each season La Criée works with one or more of its men and women associate artists. This collaborative method facilitates a new, experimental approach to working with artists in the long term, experiencing the creative process at close quarters, inventing new kinds of partnerships and developing special interconnections with our various publics.

Direct collaboration with artists has allowed the art centre to play an active part in ambitious projects that often overspilled the context of an exhibition or La Criée’s four walls. To cite one example, in 2015–2016 Ariane Michel’s La Rhétorique des marées (The Rhetoric of Tides) took the form of a group show on a beach in Brittany, the making of a film, a solo exhibition at the art centre and various publications.

In return for this commitment the associate artists enrich the art centre’s programming with their interests, ideas and experiments, and trigger exhibition curatorships, programmes of events, study days, research modules, invitations to other artists and thinkers, publications and so on. 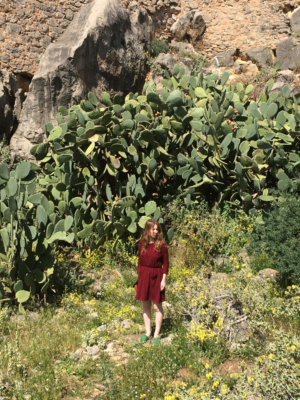 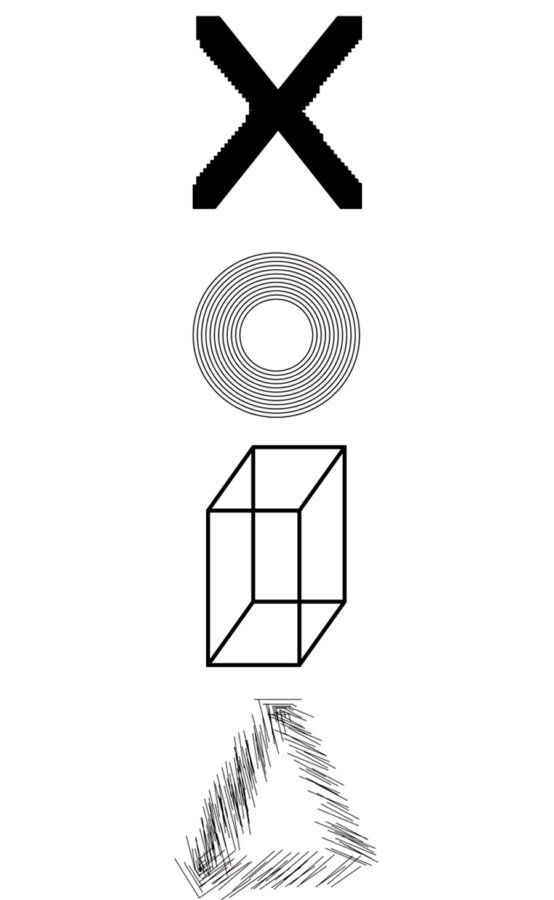 The thematic cycles are based on the working structure set up at La Criée in 2008, in the form of four creativity platforms: Art au Centre (Art at the Centre), Territoires en Création (Territories in the Making), Des Rives Continentales (On Continental Shores) and Prospectives (Looking to the Future). These platforms enable activity on the centre’s different geographical fronts: its exhibition space (Art at the Centre), the city of Rennes, the Ille-et-Vilaine département and the Brittany Region (Territories in the Making), Europe (On Continental Shores) and and the more intangible territories of research (Looking to the Future).

Art at the centre revolves around on-site exhibitions. The works on show – most of them new – are by artists working in Brittany, elsewhere in France, and internationally. This platform is also a point of contact between a very varied audience and contemporary art, via the Rayons Verts (Green Flashes) programme of multidisciplinary events, and tours, encounters, workshops, etc.

Territories in the making undertakes ventures in artistic creation, liaison and dissemination in Rennes, the Ille-et-Vilaine département and the Brittany Region. An approach based on long-term cooperation brings together artists, residents and a network of educational, social welfare and other partners.

On Continental shores is committed to the production and circulation of outreach projects on a European and international scale: residencies for artists and curators, coproduction of artworks and exhibitions, joint publishing ventures and research programmes. 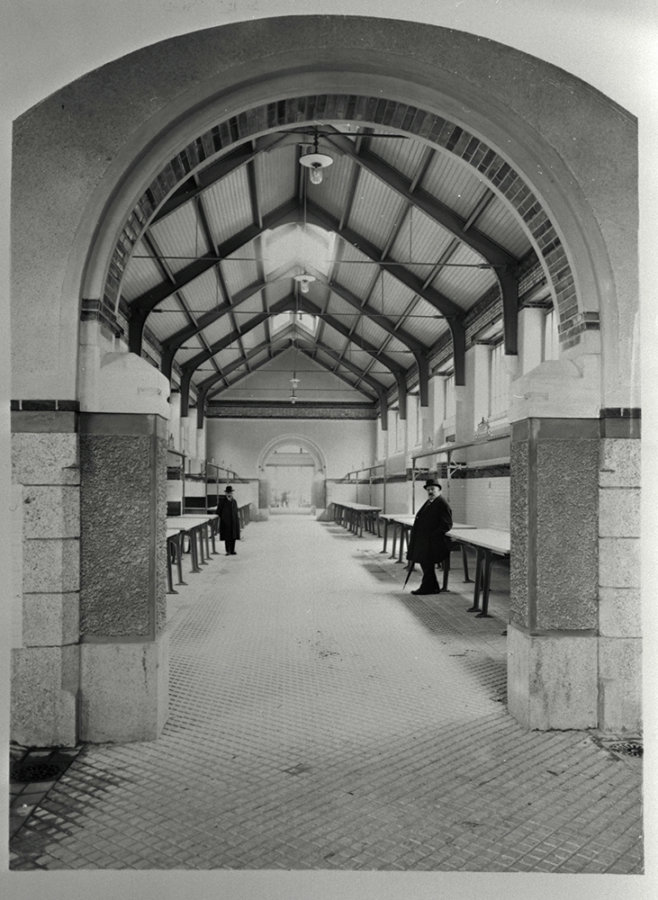 The Halles Centrales covered market was built in 1923 by architect Emmanuel Leray. The pediment still bears the words criée municipale (“municipal fish market”), even though wholesale dealing in fish, and then fruit and vegetables, came to a halt in the 1960s. The other parts of the building are still home to a food market open every day.

La Criée became a centre for contemporary art in 1986. It comprises two exhibition rooms of 135m2 and 25m2 and two small rooms each 12m2. The remainder of the building is home to a busy daily market.

La Criée became a centre for contemporary art in 1986. It comprises two exhibition rooms of 135m2 and 25m2 and two small rooms each 12m2.

The art centre was initially run by the non-profit association La Criée, Halle d’Art Contemporain. With Yannick Miloux as its president until the early 1990s, it offered exhibitions backed up by production of artworks and publications; and as part of the first generation of art centres it gave pride of place to solo shows by internationally recognised artists like Dan Graham (1986), Erik Dietman (1986), Gloria Friedman (1986), Antony Gormley (1987), François Morellet (1989), Présence Panchounette (1989), Tania Mouraud (1990), Hubert Duprat (1990), Rolf Julius (1990) and Ilya Kabakov (1992).

In the 1990s the Brittany Frac (Regional Contemporary Art Collection) under Catherine Elkar took over, using the old fish market site for exhibitions drawing on its own collection and on the local and international scenes.

La Criée Centre d’Art Contemporain was founded as a City of Rennes cultural facility in 1999. Until late 2011 it was directed by Larys Frogier, who confirmed its international status through a host of cooperative ventures with galleries and art centres and a policy of production of works by such established and upcoming artists as Adel Abdessemed, Ugo Rondinone, Charles Sandison and Paola Pivi. His close links with the University of Rennes 2 enabled a rapprochement between art professionals and the research sphere that found expression in diverse, politically inflected symposiums reflecting his artistic and critical commitments. One example was Ex-Tensions: African Art and Forms of Post-Colonialism, held in 2009.

Sophie Kaplan has been the director since September 2012. While continuing the emphasis on creation and dissemination, she has brought a fresh momentum to the art centre, embodied mainly in the setting up of the thematic seasons and ongoing work with associate artists. 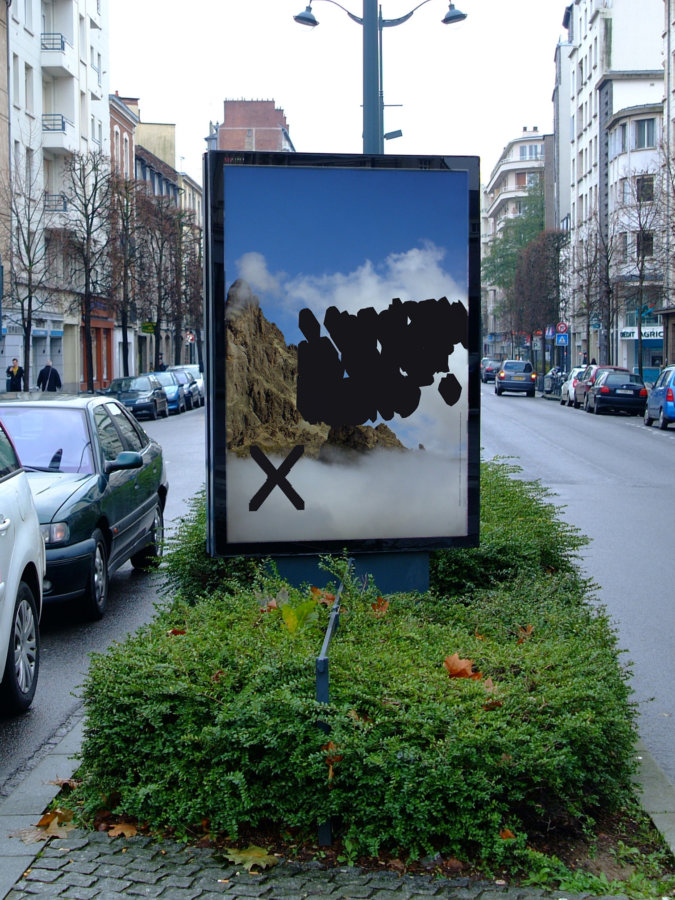 In response to a public commission, Jocelyn Cottencin of the Lieux Communs agency designed La Criée’s graphic identity in 2008. His basic idea was a visual and graphic extension of the art centre itself – an exploration of its evolution from a “white cube” to a protean, highly ramified space reflecting the centre’s multiple activities and projects.

Priority was given to typography as a defining graphic element offering scope for experimentation that mirrored the art centre’s openness to different aesthetic and conceptual forms. Starting out with the Helvetica typeface as an analogy of the white cube, Lieux Communs worked through a range of graphic experiments reminiscent of the way La Criée’s activities spread beyond its walls. The upshot was five new typefaces: one for all the texts (Miedinger v. Licko, 4 versions), and one for each of the four platforms (Lissitzky v. Brody, Albers v. Riley, Vertov v. Judd, Fontana v. Maeda). Together with Helvetica in its original form these formed the basis for a signature and an associated graphic system.

For the series Pounding the Pavements, Beating the Bushes and Breaking the Waves (2013–2016) Lieux Communs came up with an extension of this graphic identity. The aim was not to modify the existing system, but to develop a specific visual vocabulary that could be grafted onto it; to consider the initial graphic vocabulary as an architectural structure and the 2013–2016 project as an extension of that structure. Pounding the Pavements, Beating the Bushes and Breaking the Waves were characterised by movement and the idea of circulation. One of the fundamentals of the visual project was an organic aspect, a connection with a handmade form. And so the designing of a specific typographic family came as a radical break with the typographical context of the initial system.

The extension lasted through the three-year 2013–2016 cycle, but September 2016 saw the art centre return to the original format. This is being used in the new version of the website, with the emphasis on letterpress (Miedinger v. Licko), the importance of the relationship with the page and the interconnections between text and image. 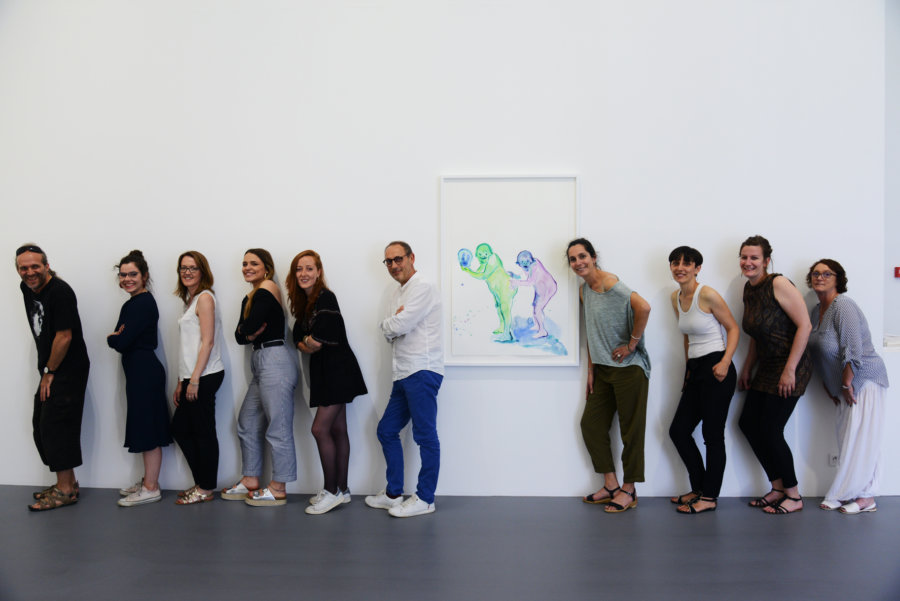 La Criée centre for contemporary art is a City of Rennes cultural facility backed by the Ministry of Culture – Brittany Region Cultural Affairs Office, the Brittany Region and the Ille-et-Vilaine Département.

La Criée is a member of the networks a.c.b. (contemporary art in Brittany) and d.c.a. (French association for the development of art centres).