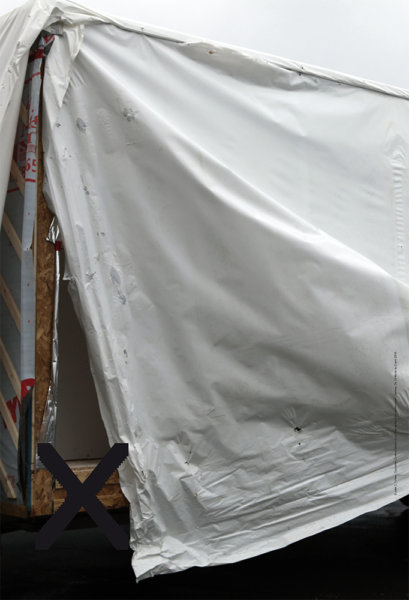 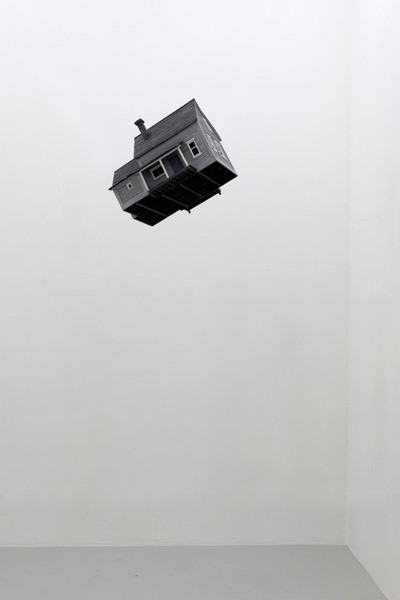 Julie C. Fortier’s videos, installations and photographs all have in common the same speculation about emptiness and the passing of time. For her exhibition at La Criée she is proposing an exercise in “off-centring” by providing visitors with a different perception of their surroundings.

Julie Fortier began in the filmed performance field, but the evolution of her gradually brought these personal appearances to an end; the emphasis now is on more pared-down forms and an underscoring of absence and emptiness via subject matter collected in the course of her travels by car and train and on foot.

The “Home-Cinema” project originated in her home town of Sherbrooke, Quebec, in the context of a seemingly banal event: the raffling of a prefabricated house. Each year in March a house is assembled, decorated, furnished and thrown open to visitors on the parking lot of a shopping mall that serves as a temporary exhibition venue. Once the winning ticket has been drawn the house is dismantled and transported to its final foundations on an estate.

As a symbol of stability the house is often given a hard time in this Canadian artist’s work. The two-screen video projection Maison Desjardins shows the assembling and dismantling processes simultaneously: out of the ongoing interplay between construction and deconstruction emerges an interzone the viewer slips into.

The house is something many people dream of making their own one day, and yet there is something melancholic about the way it is displayed here. Like the Décor Sears sign on the store in the background, it is reduced to no more than a prefab/knockdown set whose impermanence raises questions about drifting and rootlessness.

Cinéparc, another work in the exhibition, is a static shot of a drive-in cinema during the day – a mise en abyme of the movie screen via a 35mm projection of its image in the exhibition venue. Standing out against the surrounding landscape, the screen seems to partially mask the image space; in doing so it loses both its quality as object and its scale, until birds land on it and discreetly confront the viewer with the image’s actuality.

Fortier’s sculptures and installations are marked by this same speculation about emptiness and the passing of time. In La Tribune, samedi 25 mai 1985 she draws on a childhood memory of a news item in La Tribune, her local newspaper, on Saturday 25 May 1985. Presented as heaped-up sheets of newsprint, the work reproduces the page as the artist remembers it: the news item and its place in the layout, with the rest of the page empty, like an obstinately blank screen.

born 1973 in Sherbrooke, Canada
lives and works in Rennes, France 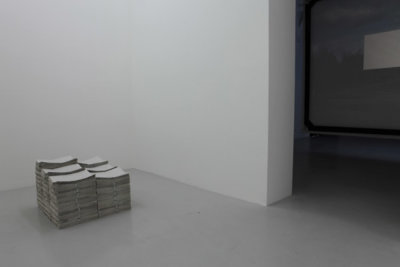