born in 1964 in Brunnen, Switzerland
lives and works in New York, United States 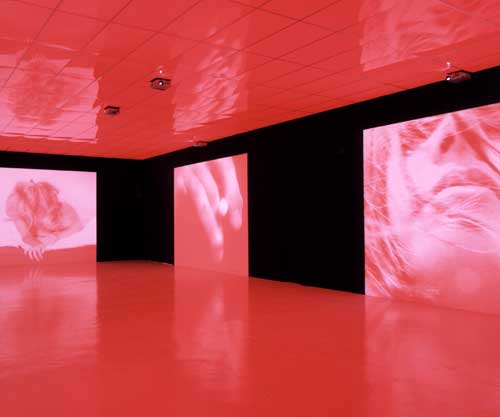 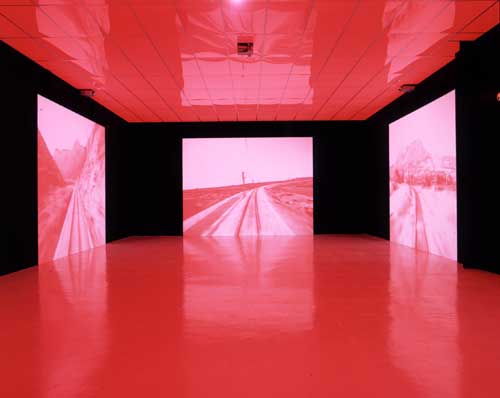 For the festival Mettre en Scène, Edition Spéciale, Ugo Rondinone was invited to explore four venues in the city of Rennes: the TNB Gallery, the Art & Essai Gallery, the roof of UBU concert hall and the contemporary art centre La Criée.

Productions allowed to discover the rich diversity of Rondinone’s work and the extended scope of his formal vocabulary used through video, photography, painting, sculpture…

At the contemporary art centre, the visitor was invited to plunge and to let him/herself go into a strange and dream-like world. The installation consisted of:
• six videoprojections inserted in black frames,
• one ceiling made of plexiglas above which an red lighting irradiated the space,
• 30 seconds looped sound which was an aria interpreted by Cécilia Bartoli spreading into the space.

On the walls, two visual sequences were projected: one man and one woman appeared simultaneously on different screens, and long travellings were showing railroads. The artist combined repetition, displacement, gaps between pictures, slow motion, throbbing music, disturbing the space and leading to a sense of space-time distortion.

“I invented it all, in the hope it would console me, help me to go on, allow me to think of myself as somewhere on a road, moving, between a beginning and an end, gaining ground, losing ground, getting lost, but somehow in the long run making headway.” Samuel Beckett

Without beginning-ending story A Spider… remains a fiction to build, a series of scenes in which the thread is always out-of-the-frame. The black spaces between the screens become areas for the “possible”, voids in which thought could find news ways of intervention.
On the contrary, within the screens, characters are enclosed, going and coming back, trains going to nowhere…
Rondinone’s work was often tied to the writings of Samuel Beckett. Indeed, the restless wandering, the vacuity, the ordinary, the human time, the solitude, are recurrent themes in each of the artists’ work.

One of the specificity of Rondinone’s creativity lies in repetition and reinterpretation of his works, since one series of videos could be presented either in the form of an environmental videoprejection, or be inserted into an installation with tv monitors (Roundelay, 2003 and Clockwork for Oracles, 2004). These characteristics reveal the way the artist p(l)ays attention to the visitor, always changing his perception of the space and picture.
A Spider… reminds in a way the construction of scenic spaces (reminding the theater, the opera, the cinema), but it is always a space in which the spectator is a kind of traveller endlessly remaking the picture or the story. 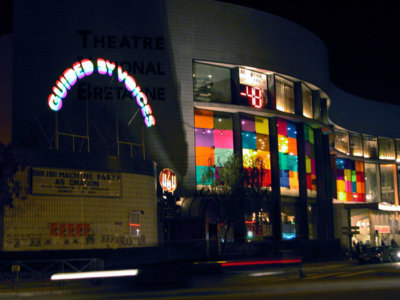 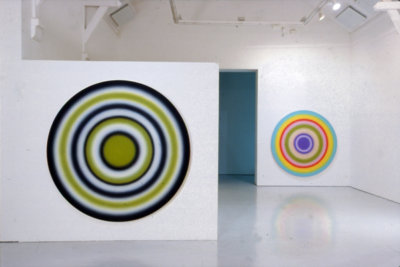