|art at the centre|events|The Fortunetellers 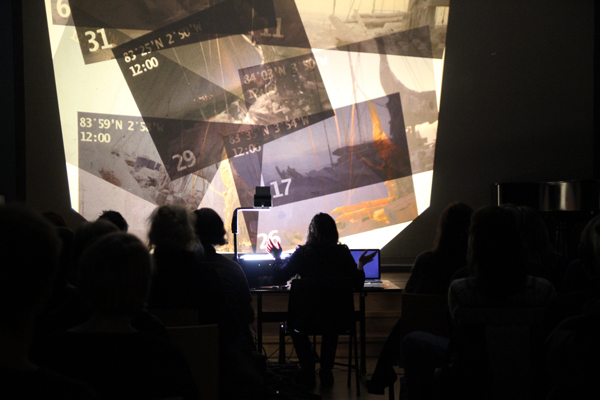 The Fortunetellers is a narrative-based performance that combines memories with a vast array of documents created and archived along the way (photographs, videos, annotated sketches, maps, travel log). She superimposes live storytelling, recorded sound, still and moving images, to conjure up the terms and rituals of daily life in the Arctic night.

« Standing at the front of the dark theater, Ellie toggled between video footage and transparencies of photographs, sketches, maps and diary entries which were projected from a light-box. You could see shadows of her hands against the light as she laid down each image. She delivered a monologue, which was interspersed with recordings of conversations with the crew, and sounds of the Arctic — the groan of polar ice, the squeak of an anchor being lowered. The narrative had the shape of a boomerang: she’d begin in the surreal day-to-day minutiae of polar life, draw tangential connections outwards to mythology, archaeology and philosophy, then return again to the ice. It felt like a haunted, dream-version of those lectures that Victorian explorers would deliver upon returning from the edges of the world. »

Will Hunt, excerpt from interview in The American Reader