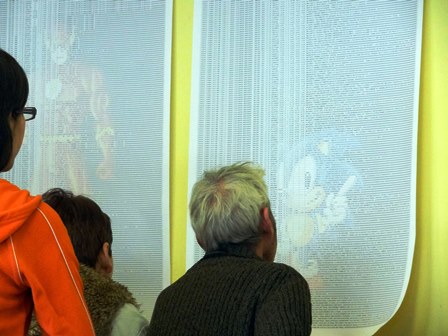 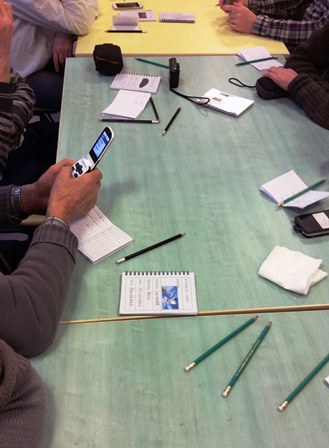 As part of its artistic season “Battre la campagne”, La Criée invites the artist Thomas Tudoux to develop a creative project at the hospital center Guillaume Regnier, with people in psychiatric of the Rennes and Fougères G04 unit. Thomas Tudoux’s artistic research takes on many different forms and invites us to cast a somewhat removed eye over our society marked by efficiency and performance.

My interest in this type of institution (a hospital centre) lies in the complete upheaval of the restriction of time brought about by our society. My very strict plastic choices are there to signify this ubiquitous though different setting. By way of this exercise, however, the general feeling of the people in care seems, it just so happens, to be a re-appropriation of their time, with each one of them giving his or her personal vision, trying every half an hour to present their daily round through specific aesthetic factors, or creations. For these people, within the actual framework of a plastic constraint, what is involved is casting a particular gaze over their environment and becoming slightly more involved in it. In concrete terms, it is a matter of writing a journal, not of a journey, but of a stopover.

The low-tech social network set up for the residency was initially conceived to respond to the imperative of creating short forms—we may note here the paradox of using simulacra of hyperactive tools to describe a pace of life which is not hyperactive . It is only once all the data have been gathered that I really had the sensation of having created a kind of Big Data. But well removed from this type of surveillance, Rhythm GPS (for example) seems to me closer to the poetry of Deligny’s roaming lines, insomuch as it proposes another narrative possibility. On taking a closer look at it we can note that the elements produced here do not link up with the narcissistic representations which are commonly found as a main method of interaction of social networks. Everything is done by hand, together, based on notebooks and simple tools, in a climate of trust. Based on the personal, and even the private, a collective project is the end result.

So all these accumulated data are not there to be analyzed, but to make a different narrative, reflecting on our rhythms of life by asking ourselves what we want to do with our time, what we can do with our time and, lastly, what we are doing with our time.

In Rhythm, as in almost all my work hitherto, my attention is focused on constraint, social pressure, and individual stress. In an upcoming project, I would like to change positions and, on the contrary, work on liberated time, with an interest, for example, in retired persons as people liberated from employment.

Thomas Tudoux then produced the edition Rythme which condenses all the data gathered in the form of an edition which can be developed to make an installation.

born in 1985 in Barbezieux, France
lives and works in Rennes, France

discover the logbook of Thomas Tudoux