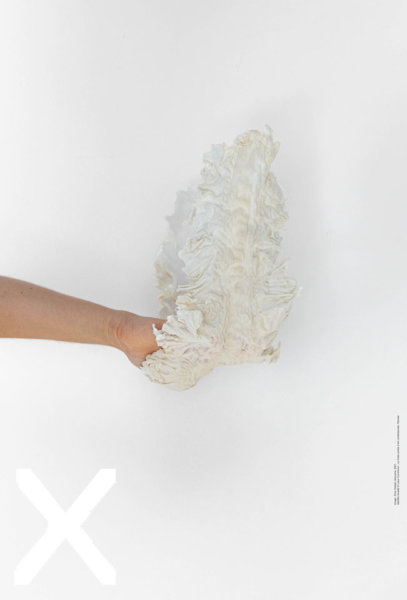 In Greek, molusma means stain, or defilement. First put forward in the 1960s by the marine biologist Maurice Fontaine to designate the current geological era and its defining production of waste, it has since been superseded by “Anthropocene”.

Elvia Teotski’s exhibition restores the term’s status, in the same spirit as her broader recycling of decommissioned and discarded materials. Welcoming the public into an inhabited space marked by constant yet barely perceptible movements, she invites them to roam attentively through an environment where different organic components co-evolve. Conceived as a non-spectacular entity in its own right, the exhibition calls on visitors to take their time, to savour the minimal odours and movements that testify to the presence of other living beings and functioning biological processes.

Molusma takes as its starting point the artist’s extensive research along the Breton, Marseille and Mexican coasts, and her simultaneous interweaving and questioning of their territorial relationships. A trained agronomist, she focuses on the shifting space where interdependent forms of life accumulate and human societies leave their mark. Drawing on patient observation of environments on the fringes of agricultural and marine production zones in Brittany, she has collected samples and consulted with activists, historic building experts and scientists. Whence her fine-tuned experiments, rooted in experience of the territory and its multiple inhabitants.

Coming to terms with materials which, altered by human activity, exceed their users’ initial intentions and generate entropic processes, Elvia Teotski explores what anthropologist Anna Tsing calls a ‘feral ecology’: an environment made up of domesticated creatures whose evolution defies human control. The artist engages with these unstable configurations, in which life forms emerge from the destruction triggered by productivism’s promise of ever-increasing yields. She occupies the tipping points, where new forms of existence emerge in affected environments and give rise to creative speculation.

The exhibition presents adobe constructions whose “mud bricks” are produced in collaboration with the solidary brick factory T.E.R.R.E., using earth recovered from building sites and seaweed washed up on the coast. Assembled into building components, the evolving bricks absorb ambient humidity and become carriers of mould, or shrink as they dry, altering their balance. Insects nest in the interstices of the buildings and in turn become part of a food cycle: while they are fed off the remains of the nearby market, they are themselves potential food for humans. At a time when intensive livestock farming and its drastic consequences for animals, the soil and the marine environment are coming under increasing fire in Brittany and elsewhere, Molusma regulates a fragile set of interdependent organisms, which require constant attention to their habitat. It invites the public to enter the “sensitive zone”, tune in and take care. 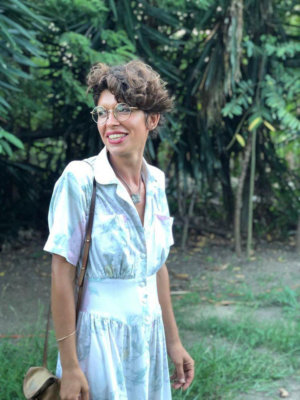 born in 1983 in Toulouse, France
lives and works in Marseille, France 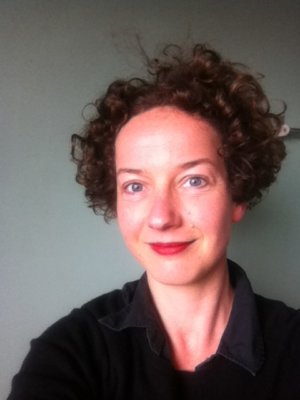 lives in Paris, France
teaches at the Valencia School of Art and Design, France 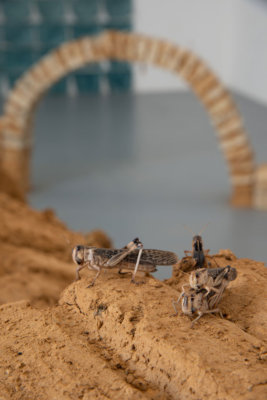 A conversation with the locusts 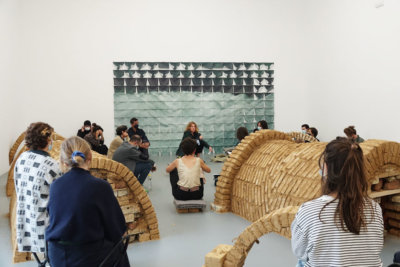 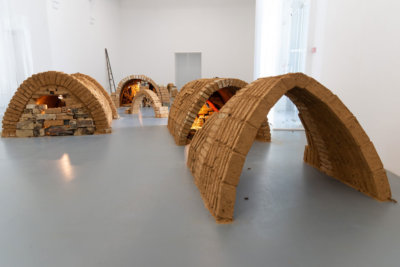