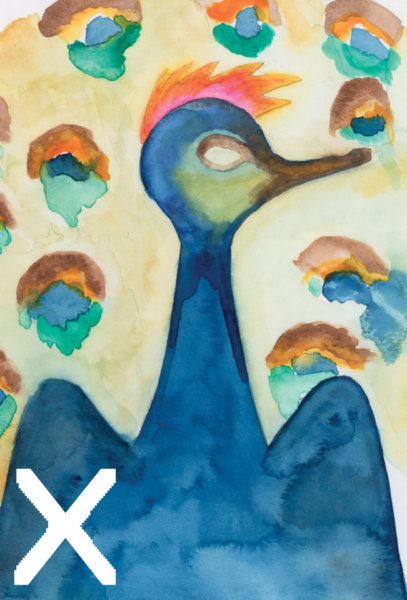 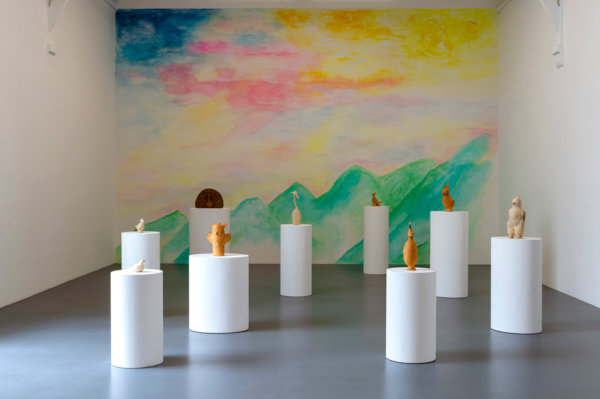 (The Canticle of the Birds)

From 21 May to 28 August 2022, La Criée centre for contemporary Art is presenting Le Cantique des oiseaux (The Canticle of the Birds), a choral exhibition and new production by Katia Kameli, in which the artist proposes a variation, composed of musical ceramics, watercolours and a film, on the famous text of the same name by the Persian poet Farîd-ud-Dîn ‘Attâr.
With Le Cantique des oiseaux, Katia Kameli continues her inter-cultural journeyings and initiates direct contact with clay, a new material for her.

Attâr’s text (1174=1248) sings of the journey of thousands of birds in search of the fabled bird Simorgh, a central figure of Persian mythology. This symbolic spiritual journey of initiation takes them through the seven successive valleys of Desire, Love, Knowledge, Plenitude, Oneness, Perplexity, Denial and Annihilation. Guided by the hoopoe, symbol of wisdom, only thirty birds reach the end of the journey.

Kameli gradually became interested in this major Eastern text through French translations: firstly that of Henri Gougaud, then that of Jean-Claude Carrière and finally the recent one by Leili Anvar, from which she has borrowed her title.

With this reworking* of Attâr’s text, the artist continues her exploration of the narratives, their successive translations, their flow and their  evolving  depth and multiplicity of meaning.

She is also interested in the spiritual dimension of Attâr’s story, in the inner quest that unfolds through the figure of the bird, an animal that links the earth to the sky and whose language we find both so familiar and so mysterious.

Kameli’s translation of the The Canticle of the Birds is sensual and multi-sensory. It is expressed in a series of ceramics, which take the form of some of the birds in the poem: the hoopoe, the peacock, the nightingale, the heron, etc. These sculptures are also musical instruments. Their singing can be heard in the accompanying film, activated by a procession of musicians, as well as in the performances, which set the exhibition space resonating.

Watercolours, some of which served as preparatory drawings for the ceramics, complete this allegretto. Their inspirations are multiple, from Persian miniatures to Minoan sculptures, via Valentine Schlegel and Asger Jorn. Made on paper of different sizes, some are surrounded by clay frames; they are at the crossroads of scholarly and popular art. Like the sculptures, they have to do with the birth and memory of gesture.

“We don’t invent anything, we always reinterpret in another language.” — Katia Kameli

* – The term ‘reworking’ is used by Omar Berrada in his essay on Stream of Stories. He himself takes this term from Valentin Y. Mudimbe (The Invention of Africa) and writes “It is a question of exhuming a story, of remembering it, but also of re-articulating it”, in Katia Kameli (Paris: Manuella Editions, 2021), p. 105

As is often the case with Kameli, this new production is the outcome of several collaborations: with the ceramists Émile Degorce-Dumas and Marie Picard, and with musicians for the composition and activation of her sculptures. 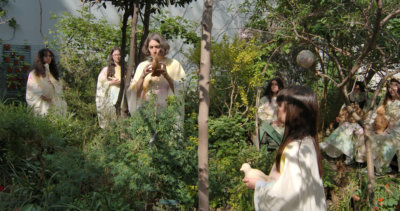 born in 1973 in Clermont-Ferrand, France
lives and works in Paris, France