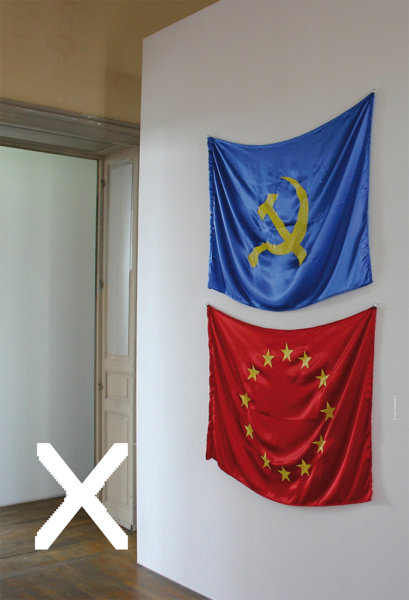 Vlad Nancă, I do not know what union I want to belong to anymore, 2003

courtesy of the artiste and the Sabot gallery, Cluj-Napoca, Roumanie 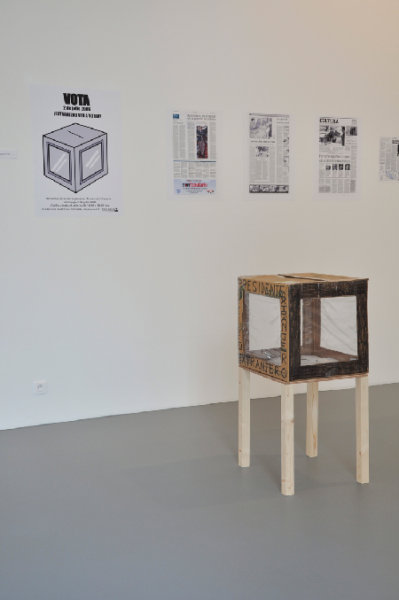 DEMOC(K)RACY #1 is the first event of a series of travelling exhibitions in Europe. This show aims to introduce young artists whose artworks question either the validity, the limits, the exploitation or the transcending of the concept and practice of Democracy in our contemporary societies. Each exhibition will be designed by a different curator in each city.

On the occasion of this first exhibition in Rennes, La Criée invites guest curator Istvan Szakats – President of Altart Foundation in Cluj-Napoca (Romania) – to generate a reflection and propose a new project around the notions of democratic practices.

“The exhibition analyzes democracy as a social practice. During the back and forth swing between direct and representational democracy society inevitably delegates a number of functions to the state and the capital (e.g. organization and control functions, standardized exchange of values etc.) and loses control over these almost instantly (e.g. bureaucracy, financial oligarchy, etc.) The regimes of truth generated (e.g. the legal regime, market fundamentalism) regenerate over the head of society and create a practices of monopoly (e.g the weberian State – holding monopoly over violence) that can be later hardly balanced by a lagging-behind civil society. But, as all systems, these are also self-contradicting ones and have soft underbellies – and thus can be penetrated – not only to give them a jolt but worse, to question the level of credit invested into them by society. One of the ways to perform this is to overuse functions / practices of these systems (e.g. the political discourse, bureaucracy, etc.). And of course, the other option (as the swing turns back) is to return to the very fundaments – the moral responsibility of choice of the individual in his or her relationship with another invididual. The presented words illustrate / document the possibility of such practices.”

born in 1979
lives and works in Bucharest, Romania 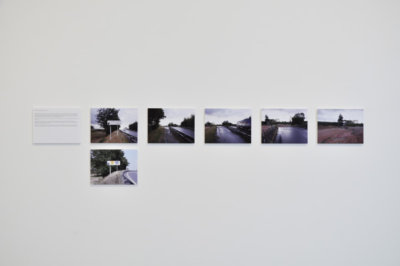