|looking to the future|projects|Contemporary Art and History of the Arts: Anachronisms, references and documents 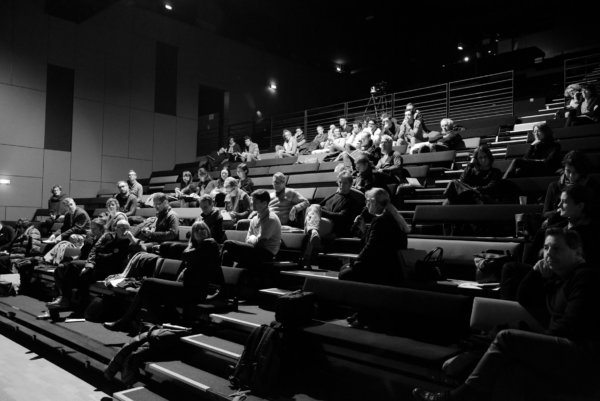 Contemporary Art and History of the Arts: Anachronisms, references and documents

Contemporary artists are not without a broad artistic culture, and many contemporary practices have grown up like rhizomes, as Deleuze and Guattari have put it: a mode of thought and creative action which is not organised in a hierarchical manner, but horizontally; this type of practice cannot have a centre. It may be used to interrogate painting, cinema, philosophy, science, language, various forms of communication, and so on. In the light of this, we believe that the relationship of students to contemporary art may serve as an appropriate approach to teaching the history of art. This contact may take place in cultural infrastructures’ exhibition venues or in the location in which teaching takes place, by means of teaching-oriented galleries. Students can thus meet and interact with artists, making it possible to interrogate different fields of thought and open up the examination of non-hierarchical modes of expression. Irrespective of the technique, the key focus is on the things which can change our relationship to the world around us – either by rectifying an oversight, or by providing a fresh insight.

The use of anachronism
An overview of the history of art can be constructed along the lines of a chronological history of artistic styles and forms. Studying works of art in this way fosters methods and concepts based on temporal linearity, the progress of forms, and the organisation and classification of works into periods and movements. However, certain art historians such as Aby Warburg (at the dawn of the 20th century) or Georges-Didi Huberman (in our own day) have been keen to envisage cross-cutting approaches to art, particularly by looking at anachronic practices with regard to forms and concepts. Something which is perceived to be an “error” or “anomaly” in historical analysis may thus be transformed into a potential method, resulting in unforeseen links between works from different periods and environments and giving rise to unexpected interpretations of works of art.
During the course of the symposium, we shall attempt to analyse the way in which the study of contemporary art can make use of such anachronisms. Apprehending, viewing and interpreting a contemporary work of art should make it possible both for its temporal references to be revealed and to take a step back from the constraints of historical linearity. Can our relationship to contemporary works of art enable us to break free from the issue of chronology altogether? Is there any possibility of establishing a discourse on these works based on the notion of anachronism? If so, how may a work be apprehended outwith linear questions of chronology and style?

Highlighting references inherent to the works themselves
Works of art are created within historical, sociological, scientific and psychological contexts. Fed by a variety of references, which may be more or less evident, they may act as vehicles for many different fields of knowledge. Grasping these references involves stating them, studying them – and sometimes, exposing them. How can these references be taken hold of without wrongly exploiting the work or compromising its integrity? How can cross-disciplinary references be discussed in artistic discourse or as part of an exhibition or publication? In what ways can the various facets of a work be revealed?

The use of documents by artists and exhibition organisers
It is generally believed that works of art and art exhibitions are intended to offer an aesthetic experience consisting of a series of forms, arranged and interlinked within a given space. This notion is challenged when contemporary works and exhibitions appeal directly to historical documents as the key components of the form of the work or the mode of the exhibition. Use of documents in this way establishes an approach, a form and a critical discourse with regard to the works, the context in which they are expressed and their relationship to history. Does this mean that the aesthetic experience has been done away with, or should an experience still be sought and formulated on the basis of these new resources?
In the light of these observations, it appears vital to ask artists and exhibition organisers how they use and appropriate documents. How should one apprehend an exhibition or work created on the basis of media which are actual historical references, a record of actual events or official documents? What is the status of a document which forms part of a work of art?

10:30 am
Philippe-Alain Michaud
Mnemosyne and the issue of anachronism. Activism and display in Warburgian history of art
If it is no longer thought of simply in terms of historiography, the history of art can be seen as the ideal locus of anachronism. The particularity of Aby Warburg in his depiction of his journey through Hopi territory and his investigation of the Renaissance is that he succeeded in establishing a fictitious, anachronistic (and atopical) framework of analysis which was free of any form of causality. In doing so, he introduced the specific method of montage, which Einstein also referred to at that time as “collision”, into the history of art. This had two major consequences. The first was to legitimise the concept of activism within the history of art: historians could no longer be content simply to interpret phenomena: they produced them. Secondly, from then on the history of art could no longer be conceived of as a merely discursive practice, but rather as a re-presentation: instead of providing meaning, its purpose became that of creating effects.

Philippe-Alain Michaud is a curator at the Pompidou Centre, in charge of the film collection. He is the author of Aby Warburg et l’image en mouvement (“Aby Warburg and the moving image”), Paris, Macula, 1998.

11:15 am
Nataša Petrešin-Bachelez
Living archive: the performance potential of documents
During the course of the exhibition Les promesses du passé (Pompidou Centre, 2010), which one leading French art critic described as “essentially documentary in nature”, without saying whether or not this was a good or a bad thing, I designed the section devoted to contextualisation. This section apprehended the fixed and changing form of documents; I also worked hard to demonstrate the narrative and performance potential of documents. Contextualisation, used as an additional component on top of the traditional display of works of art to highlight “living archives” of all natures, has emerged in art and in the contemporary practice of curators, at the same time as the occurrence of what has been described as an “educational milestone”. By concentrating on the various formats of materiality, reception and performativity, this “need to document” now constitutes a decisive contribution to the practice of temporary exhibitions and the display of museum collections, offering new approaches to the way they are visited and consequently, more complex relations with the public.

Nataša Petrešin-Bachelez is an art critic, an independent exhibition organiser and the co-director of the Laboratoires d’Aubervilliers. With Christine Macel and Joanna Mytkowska, she is one of the organisers of the Pompidou Centre exhibition Les Promesses du Passé, which focuses on contemporary artistic creation in Central and Eastern European countries (2010). She often writes for international contemporary artistic reviews (Springerin, Parkett, Bidoun, Sarai Reader, Framework: Finnish Art Review) and serves on the editorial committees of ARTMargins Contemporary Central and Eastern European Visual Culture magazine (UC Santa Barbara) and Maska (Ljubljana).

2:15 pm
Signs and Wonders (“The theory of modern art and the theorem of accursed art”)
Performance by Guillaume Desanges assisted by Alexandra Delage At the invitation of the French Association of Exhibition Organisers (Commissaires d’Exposition Associés, C-E-A)
Based on a script, this lecture aims to highlight the way in which a number of fundamental geometrical shapes generated by rationalistic, mathematical modelling contributed to the avant-gardists of the twentieth century and modernity – and persist today, not only as a means of representation and symbols of knowledge, but also as objects of worship or even as idols. From Duchamp and Malevich to Sol LeWitt, Donald Judd, Bruce Nauman and Dan Graham, the aim is to embark, Indiana Jones-like, on an investigative adventure into how recurring signs and their archaic symbolism tell a secret story of modernity using hidden language, code, and a distinctive mysticism, with its own initiates, orders, occult rituals and heresies.

Guillaume Desanges is an art critic and independent exhibition organiser. He is the joint founder and director of Work Method, an independent production body. He is a member of the editorial committee of Trouble review and the French correspondent for the reviews Exit Express and Exit Book (Madrid). He coordinated the artistic activity of Laboratoires d’Aubervilliers from 2001 to 2007. In 2007-2008, he was in charge of programming for the la Tôlerie Arts Centre in Clermont-Ferrand. For 2009-2011, he is the guest organiser at the Le Plateau-Frac Ile de France arts centre in Paris, responsible for two years’ worth of artistic programming.

3:15 pm
Morad Montazami
Collector-artists and the ethnographic model
Traditional, “encyclopaedic” museums are a thing of the past, as is the minimalist “white cube” model. With the dawn of the 21st century, it would appear that we have taken a new direction in which works and knowledge are organised along ethnographic lines. Works are no longer “on display”; rather they are to be “consulted”, “read” and “investigated”. There is a return to structural elements such as display cases along with archiving and documentary items and the emergence of a leading role for fragments, which serve as a nexus through which relations to this knowledge pass. As a result, collections should no longer be seen as an all-encompassing narrative or a proprietary artefact, dealing with the history of art, which supports the institution of the museum; instead, collections become part of the theoretical corpus of the artist themselves, rather than that of the museum. Based on examples including Susan Hiller, Jeremy Deller and Francis Alys, we shall examine the creation of displays in which the museum becomes an anachronic instrument, crossing borders and offering a fresh reading of history (and thus of the history of art) – including its flaws and unconfessed failings.

Morad Montazami is an art historian and doctoral student at the EHESS Centre for the History and Theory of Art (CEHTA), where he is conducting research into “the shift towards ethnography in contemporary art”. He wrote a number of the texts in Face au réel: éthique de la forme dans l’art contemporain (Archibooks), contributes to the review ArtPress and heads up the review Zamân.

4:15 pm
Géraldine Longueville
At the invitation of the French Association of Exhibition Organisers (Commissaires d’Exposition Associés, C-E-A)
The aim for this symposium will be to bring along documentary resources and examine them ‘live’, investigating together with the audience what the potential consequences of reading these documents might be, and imagining the design of an exhibition structured around this document-based practice. A number of avenues will be investigated:
independent publishing, micro-publishing, limited editions (Dexter Sinister, Roma Publication, The Unready Magazine etc.)
the role attributed to published books and images by artists (Ben Kinmont, Aurélien Froment, Mark Manders, Pierre Leguillon, etc.)
organisers’ archives: reading, discussions, meetings and notes in relation to our work to organise the April 2011 exhibition at Le Quartier, Quimper. During the lecture, we plan to screen documentary resources; actual printed documents will also be used and leafed through live (books, reviews, annotated photocopies, etc.), with overhead projection of the process. The idea is to present and affirm our current documentary research as a multi-branch, open-ended stage: an ongoing process which provides the opening theme of the exhibition which is to follow.

Géraldine Longueville is an exhibition organiser. From 2001 to 2003, she was a member of Glassbox (www.glassbox.fr), an independent contemporary arts venue in Paris. In 2006, she set up La galerie extérieure, a vehicle for exhibition protocols offering an alternative to traditional venues and formats. In 2008 and 2009, she was jointly responsible for exhibition programming at La Vitrine. Since 2009, she has taught at the Paris-Cergy Higher National School of Art.