|art at the centre|exhibitions|En Transit 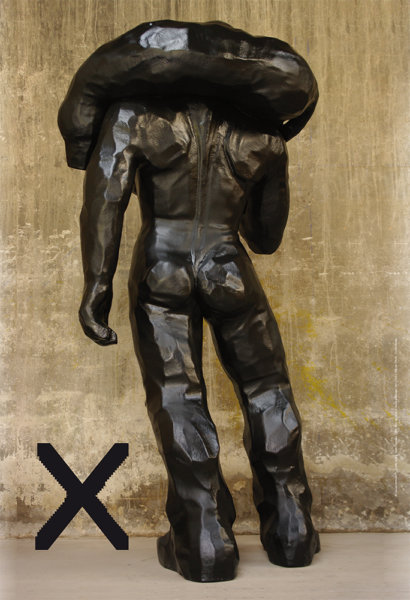 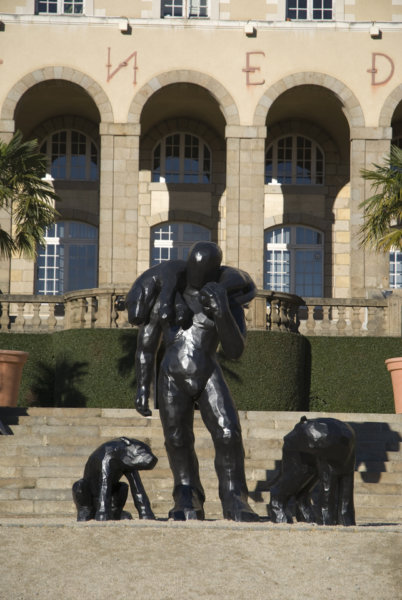 Cyrille André, Grand passeur, 2009, view of the exhibition In Transit, garden of the palais Saint-Georges, Rennes, 2010

From October 1st 2010, the sculptor Cyrille André invests the Patio of Rennes Museum of fine arts and the gardens of the Palais Saint Georges. With this exhibition, the artist visualizes the topics of migration and banishment.

Graduated from the Superior School of Art of Grenoble, Cyrille André develops since the 90s a singular practice of sculpture. The use of wood and the practice of direct cutting characterize its works which refer to the notion of figure. Formally remote from any academic realistic representation, Cyrille André’s characters and animals deliver us their vision of the world. Cut boorishly in the axe and in the chain saw, these massive and powerful bodies impose nevertheless a sensitive reading on the fragility of our society. The wood, often treated in a raw way, is sometimes associated with the lead or with the aluminum, allowing to stress certain anatomical zones without delivering however any identity detail. This impression of anonymity is strengthened when the artist chooses to cover completely his sculptures of black resin polyester.

The exhibition In transit spreads on two sites: the Patio of Rennes Museum of the fine arts and the garden of the Palais Saint Georges. It includes several sculptures and some of them were produced by the contemporary art centre.

The Rennes Museum the fine arts displays five new works. Two sculptures in resin polyester suspended by nets filled with balloons, literally seem to float in the space. Three sculptures of raw wooden dogs are solidly anchored in the ground of the museum. Not far from there, the paths of the Garden of the Palais Saint Georges, welcome a ” Grand passeur” (Border escort) holding over his shoulders a dog and being surrounded by two massive dogs. Realized in black resin polyester, these sculptures confer a particular density and gravity in the route of the park walkers.

With such a visual confrontation between sculptures anchored on the ground and aerial works, the artist questions the notions of migration and movement. This passing state is strengthened by the double mode of display of the works, which leads ones coming and going between the inside of the Museum and the outsides of the Palais Saint Georges. 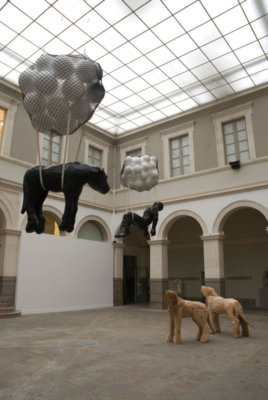 born in 1972 in Tassin-la-Demi-Lune, France
lives and works in Grenoble and Marseille, France